Award winning songwriter Dan Weber has been described as “The Classic Mid-Life Overnight Sensation” after bursting onto the festival scene in 2010 to a standing ovation at the Sisters Folk Festival for his engaging set in the Dave Carter songwriting contest. Since then he’s toured extensively across the country becoming a rare 3 time finalist in the legendary Kerrville ‘New Folk’ competition, had 2 top finishes in the Woody Guthrie songwriting contest and in 2015 won the prestigious Winfield, Kansas ‘NewSong’ contest for Oh Woody, his tribute to Woody Guthrie, that rose to #2 on the Folk charts in 2015.

An ex-Park Ranger, former Eagle Scout, Altar boy and lifelong ‘Deadhead’, Weber began performing later in life at age 40 but being a gifted storyteller he quickly won over audiences with his natural charisma, upbeat performances, authentic songwriting, and off-the-cuff hilarious stories from the many roads he’s traveled. None other than legendary Folk troubadour Ramblin’ Jack Elliott said “I love Dan’s songs and he tells really good stories.”

Originally from New York and now living in Vancouver, WA, Weber’s songs have been described as “Guthrie-esque and reminiscent of early John Prine” and “A rare combination of wit, emotion and Harry Chapin-esque imagery.” In concert, Dan’s performance has been described as soulful, sad, funny, and everything in between.

After the success of 2015’s release of What I’m Lookin’ For, a 14 song CD of classic Folk and Americana that climbed to #6 on the charts and included Oh Woody as well as the breakout hit (I Deal with) Crazy ALL Day, an everyman’s anthem and crowd sing-a-long favorite, Weber is currently working on his first live recording and new material for an upcoming CD. If his phenomenal growth in such a short period of time is any indication, it promises to be his best work yet. 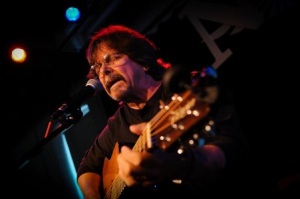 Chuck Williams has been steadily been gaining notice throughout New England songwriting circles, and has earned several awards for his finely tuned craft. He has just released his 6th CD ‘Stories I’ve Told’ in November 2017 and will feature those songs in upcoming shows.Raised in Toledo, Ohio, he has lived most of his adult life in Massachusetts. He has been traveling New England sowing seeds of his songs along the way. His lyrics and melodies are a musical journey reflecting emotions of everyday life. If you can imagine a fresh writing style rooted in the American folk-rock tradition, you would be on the track that leads to this musician’s memorable songs. The music does exactly what it is suppose to do…It reaches emotions in the listener. It gives words to feelings we all share and provokes thought long after the CD is over. His style is unique yet it feels familiar.