Maine’s Jud Caswell  is a little bit like a one-man folk festival. You’ve got your banjo picking, your Irish drinking songs, a rack of acoustic instruments, and a deep catalog of award-winning originals. He’s often compared to James Taylor and David Wilcox, but his songs draw on a long musical history and wide-ranging influences from jazz and Piedmont blues to contemporary folk and rock.

“…one of the leading singer-songwriters on the current scene… highly original (and) wise beyond his years. Caswell sings with charming warmth. By the end of the CD you want to know this man.”  -Rich Warren – Sing Out! 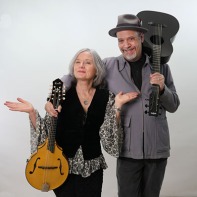 Both from California, Claudia Russell and Bruce Kaplan have honed their distinctive sound over a decade of touring festivals, clubs, concert series and house concerts.

Bruce is known for deftly accompanying on mandolin and electric guitar, providing melodic counter point and atmosphere that aspires to elevate each song just a little higher. On stage he is noted for the witty off-the-cuff remark.

Claudia is an outstanding singer and songwriter who has won numerous awards, including being twice been selected as a finalist in the Kerrville New Folk songwriting competition. Claudia is an expressive and versatile singer, as at home on a soulful ballad as a Buddy Holly style romp.