June 27 2017 the Squeezebox Stompers concert will be held INSIDE at the Wakefield UU Church 326 Main Street Wakefield due to potential storms!  6:30-8:30. You can still bring your picnic supper!

Bring your chairs and blankets, and maybe a picnic dinner for your family to the Wakefield Common (off Main Street) on Tuesday, June 27th at 6:30 pm for a lively free summer concert with the Squeezebox Stompers.  By the lake watching the sunset with plenty of space for young to old to dance along is a perfect evening outing. 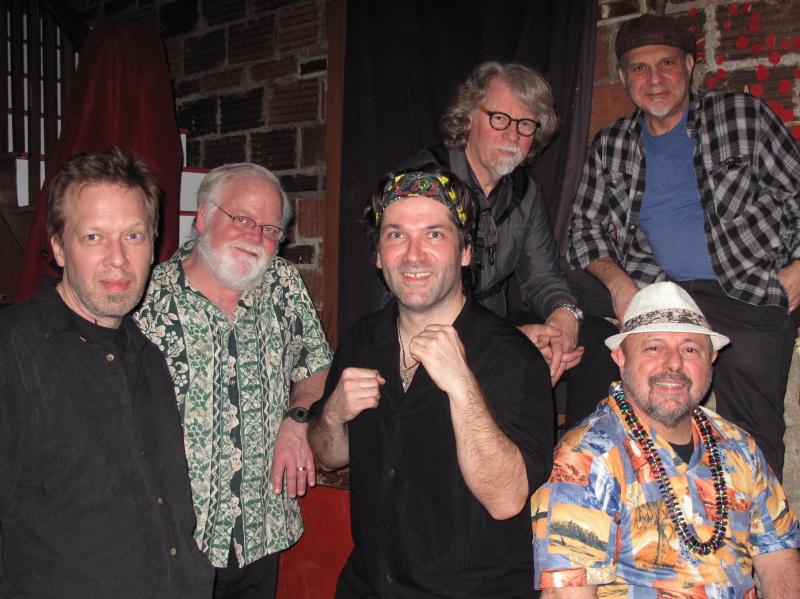 The July 11 show will feature Southern Rail, whose recordings, featuring their prolific songwriting, have climbed to #11 on Bluegrass Unlimited’s Top Thirty Single’s Chart, and have hit #1 on a number of radio stations across the nation. Their songs have graced Bluegrass Unlimited’s Top Thirty Singles Chart for a combined total of 32 months, receiving heavy national airplay. The International Bluegrass Music Association nominated southern Rail’s earlier CD, a special Bluegrass Gospel compilation entitled Glory Train, for Best Gospel Recording of the Year. Southern Rail has been selected by the New England Foundation for the Arts to be included in their prestigious Touring Roster.

JIM MULLER, Guitar and Lead Vocals: Jim was born and raised in Richmond, Virginia. Jim is the band’s principal lead singer and songwriter. Jim’s rich, distinctive lead vocals and offbeat humor have become one of the group’s trademarks. A guitarist for over 40 years, he is also known for his polished flat-picking and rock-solid rhythm. Jim is also a respected staff-writer for Bluegrass Now Magazine (Rolla, MO). His regular feature on sound reinforcement, titled “Plugged In”, has received a great deal of international attention.

SHARON HOROVITCH, Acoustic Bass and Harmony Vocals: Aggressive, creative and irrepressible, Sharon is known for her infectious smile, her limber bass work, and her tireless energy on stage and off. Sharon sings tenor and high-baritone harmonies. Sharon and Jim are co-founders of Southern Rail, and have worked on ten recording projects, eight of which are Southern Rail’s. Sharon also handles Southern Rail’s booking and publicity.

RICHARD STILLMAN, Banjo and Harmony Vocals: Rich has been playing bluegrass banjo for over 30 years. He has founded or been involved with of a number of influential bluegrass bands, including the Jersey Travelers, a previous term with Southern Rail, WayStation, and Adam Dewey and Crazy Creek. He also has numerous studio recording credits with other New England folk artists. Rich was New Jersey banjo champion in 1983 and the 2002 and 2003 New England banjo champion. He is a six-time winner of the annual banjo contest held at Lowell, Massachusetts (1985-1995), where he has presented a bluegrass banjo workshop every year since 1996. Rich has been a regular on the faculty of Banjo Camp North, has taught bluegrass banjo classes for Boston Bluegrass Union, and has taught banjo as an adjunct faculty member at Phillips Academy in Andover, MA.

JOHN TIBERT, Mandolin and Harmony Vocals: Hailing from Northboro, MA, John started playing guitar at age 14. But once he heard Dave Grisman on “Old and in the Way”, his life was never the same. He’s been addicted to bluegrass ever since. He’s a prolific songwriter and also has taught mandolin for over a decade. John’s mandolin playing is fluid, lyrical and from the heart, and his superb bass vocals are a powerful addition to the group’s signature quartet harmonies.

Sponsored by The Linden Tree Coffeehouse the concert will be held rain or shine.   If rain is predicted, the concert will be moved to the social hall of the Unitarian-Universalist Church, 326 Main St  Wakefield where monthly acoustic concerts from September to May are held. The 32nd season was supported in part by the Mass. Cultural Council, Wakefield Chapter.