David Roth strikes many chords, hearts, and minds with his unique songs, offbeat observations, moving stories, sense of the hilarious, and powerful singing and subject matter. As singer, songwriter, recording artist, keynote speaker, workshop leader, and instructor, David has earned top honors at premier songwriter competitions – Kerrville (TX) and Falcon Ridge (NY) – and taken his music, experience, and expertise to a wide variety of venues in this and other countries full-time for more than two decades. David has also taught singing, songwriting, and performance at numerous prestigious gatherings, and is also founder/director of the Cape Cod Songwriters Retreat and creator/host of Cape Cod’s “Full Moon Open Mic.” 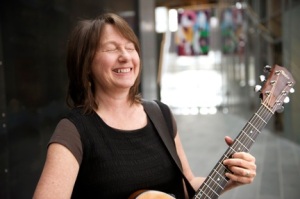 Along with four decades of performance experience and half dozen acclaimed CDs, Bernice Lewis is also a published poet, a producer, and an educator extraordinaire. Lewis — who studied vocal improvisation with Bobby McFerrin, guitar technique with Alex DeGrassi and Guy van Duser, and songwriting with Rosanne Cash and Cris Williamson — has been a featured performer on NPR’s Mountain Stage program, as well as at the Kennedy Center. “For me, it’s about the songs, each different, each a well thought out message, each a labor of love,” says Bernice. She is also a founding and current member of The Ladies Auxiliary Ukulele Orchestra.